Let us examine some examples of each kind of function.

As mentioned, the most common kind of function is the one that takes a term and returns a term, like is_zero.

For example, in Rust:

Consider the identity function, which is the function that returns its argument unchanged.

The implementation of the identity function is identical for any choice of parameter/return type: just return the term passed in. So, it would be convenient if, instead of having to define a "different" identity function for every type, we could have a single identity function that would work for any type. This is sometimes called a generic function.

What we can do is allow the identity function to take a type argument. Let us call it T. We then take a term argument whose type is T and return it.

In Rust, the identity function is:

We would like a list type to permit the elements stored to be any fixed type. That is, instead of separately defining ListOfU32 and ListOfBool, we would like to just define List, and have it work for any element type. This is called a generic type.

In Rust, the list type is called Vec. So, if T is a Rust type, then Vec<T> is the type of a vector of Ts.

We can combine type-to-term and type-to-type functions to write highly generic, reusable code. For instance, we could write a Rust function push that takes a vector and an element to add ("push") to the end of the vector, then returns the new vector.

Some languages have a fixed-length array type. This is a type which is a bit like a list, but its length is fixed, and thus part of the type itself. Languages like C and Rust permit types like this.

For instance, in Rust, the definition

Here, U32Array is a function from a term to a type. The input term N has type usize, and the output type is the type of arrays of unsigned 32-bit integers with length N.

Types like [u32; N] that contain, or "depend on", terms, are called dependent types. Not many programming languages fully support dependent types, likely due to their incredible expressive power.

Notably, Rust only permits using term-to-type functions when the terms are known before the program actually runs (aka, const).

To reiterate, the four varieties of functions are:

Most languages have term-term functions, but choose to allow or disallow the other three varieties of functions. There are three yes-or-no choices to make, and thus 23=8 possible configurations.

We may visualize the three choices as dimensions, and thus organize the possibilities into a cube. The vertices of the cube represent languages that arise from choosing combinations of allowing or disallowing the three varieties of function. All vertices on the cube allow for term-to-term functions. 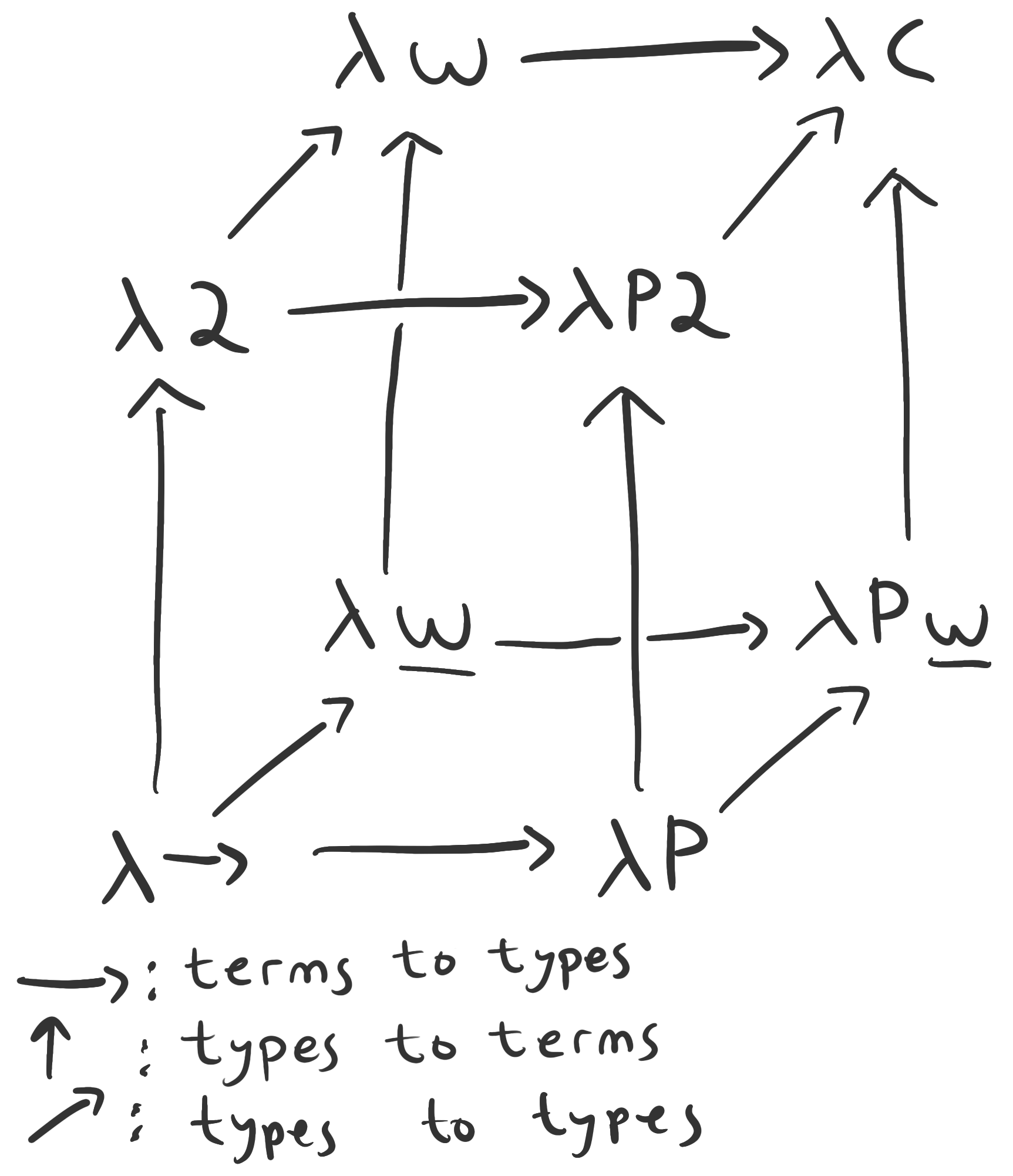 Some commonly-known vertices on the cube are shown below. Columns 1-4 correspond to the 4 varieties of function discussed.

Once we reach the calculus of constructions (CoC), the distinction between types and terms somewhat disappears, since each may freely appear in both themselves and the other. Indeed, as powerful as the CoC is, it has a very sparse syntax of terms, fully described by the following context-free grammar:

There is no separate syntax for types in the CoC: all terms and types are represented with just the above syntax.

I wrote up an implementation of the CoC in Rust for edification.

The calculus of constructions serves as the foundation for many dependently-typed programming languages, like Coq. Using the CoC as a foundation, Coq is able to express and prove mathematical theorems like the four-color theorem.

It's rather remarkable to me that functions and variables, the most basic realization of the concept of "abstraction", can be so powerful in allowing all different types of language features. In the words of jez, on variables:

I think variables are just so cool!

I think it's straight-up amazing that something so simple can at the same time be that powerful. Functions!